San Francisco needs more affordable housing, but how much should be mandated from developers remains up for debate.

Months after San Francisco voters supported an increase to The City’s inclusionary housing requirements, the first batch of recommendations for setting new affordable housing policies will go before the Planning Commission for an informational hearing Thursday.

San Francisco voters in June approved Proposition C, which requires developments with at least 25 homes to include 25 percent of those units at below market rate, including 15 percent for low-income residents and – for the first time – 10 percent for middle-income residents.

Among the five recommendations from the Controller’s Office, which were also vetted by a Technical Advisory Committee comprised of representatives appointed by the mayor and Board of Supervisors, are the implementation of different affordable housing requirements for rental and for-sale properties and an annual increase in the requirements.

Meanwhile, Supervisor Jane Kim, who sponsored Prop. C, said Wednesday she and Supervisor Aaron Peskin are exploring various recommendations for setting inclusionary housing rates that could include different requirements for different neighborhoods or building types. She expects such changes to go before the Board of Supervisors before the end of the year.

“The one-size-fits-all doesn’t really make sense,” Kim said. “Land swaths are vastly different, there’s a big difference between buildings. We really want to be thoughtful but also we really want to push aggressively to build as much affordable housing as possible.”

The recommendations set to go before the Planning Commission on Thursday include setting the on-site requirements at 14 to 18 percent for rental properties, and 17 to 20 percent for home ownership projects – both less than the 25 percent initially mandated in Prop. C.

The current inclusionary rate varies based on when projects were filed with the Planning Department. Before June, developments with at least 10 residential units were required to include at least 12 percent of the homes at below market rate or 20 percent off-site, or pay a fee.

Many say prices for homes will drop if more housing is produced. But how to both generate as many affordable units as possible from of a developer without adversely impacting the cost of housing is the challenge.

An analysis by the Controller’s Office found that for each percentage point change to the inclusionary requirement for both rentals and condominiums, an additional 175 below-market-rate units would be constructed over the next 15 years.

Previously, research by the Controller’s Office on the potential impact of Prop. C found that if construction of new housing dropped by 18 percent, housing prices and rents for all new and existing market-rate units would increase by about 2 percent.

Eric Tao, CEO and managing principal of the San Francisco-based real estate firm AGI Avant, served on the eight-member advisory committee that met with city staff and a consulting team commissioned by the Controller’s Office over the summer to vet the recommendations that are set to go before the Planning Commission on Thursday.

The committee’s goal, Tao explained, was to “maximize the amount of below-market-rate housing units by market-rate developers without jeopardizing the overall production of housing in San Francisco.” In other words, to find that “sweet spot,” he said.

Following the passage of Prop. C, Tao said he has anecdotally heard from other developers in San Francisco that the number of new residential projects that weren’t grandfathered into the older inclusionary rate has plummeted. Tao attributed the uncertainty around new inclusionary rates, coupled with an all-time high of construction costs, to that slowdown.

“We may be the victims of our own success,” Tao said. “All the units that we’re delivering right now in San Francisco have caused the rent to soften.” 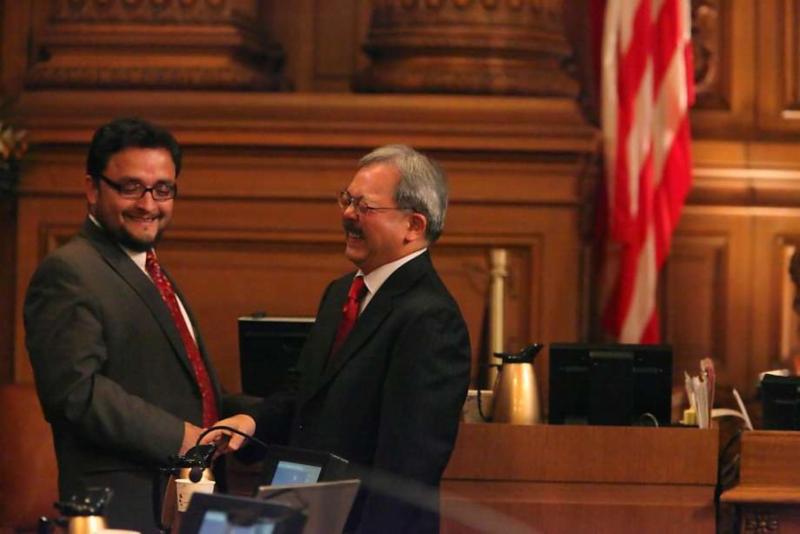 In a rare display of unity between the two, Mayor Ed Lee and Supervisor David Campos partnered to introduce legislation that would bring more affordable housing money to neighborhoods where market-rate development is prevalent.

The legislation tries to enhance the city’s “small sites program,” which helps housing organizations purchase apartment buildings where tenants are facing eviction. In exchange, the organizations must allow the tenants to remain and promise to keep the units affordable if they die or move out.

The program, which began in 2014, has committed $38.1 million to help purchase 22 properties containing 113 units. The small sites program, which has various funding sources, has $12.2 million left, and Campos and Lee want to generate more money for it. It will continue operating as long as it has funding.

Under their legislation, market-rate housing developments of 25 units or fewer could designate their obligatory affordable housing fee – around $300,000 per unit, according to the city – to the small sites program.

Significantly, the money would have to go toward purchasing a property within 1 mile of the development. Under the current system, the fee goes into a fund that pays for affordable housing projects citywide.

“We are happy to work with the mayor to make sure development fees actually go to help neighborhoods where development is happening,” said Campos, whose district includes the Mission, which has experienced widespread displacement in recent years.

The mayor’s office said it has already identified four apartment buildings in the Mission where the tenants could benefit from the small sites program.

Also on Tuesday, the supervisors unanimously passed legislation by Supervisor Scott Wiener obligating most new developments to include green roofs or solar energy systems on the roof.

The legislation builds on a law that requires new residential and commercial buildings 10 stories or shorter to install electricity-generating solar panels or a solar heating system that covers 15 percent of the roof.

The legislation passed Tuesday would allow builders to fulfill the solar requirement by installing green space covering twice the area required for solar panels – the idea being that the two options would cost roughly the same.

“Green roofs are a major tool in our fight against climate change and to improve sustainability,” Wiener said in a statement. “Our rooftops are a largely untapped resource that we need to put to work in our dense urban environment.”

For the most part, the supervisors stayed away from mention of the election, which is just two weeks away. One exception was that Farrell announced he would introduce legislation requiring greater campaign finance disclosure, which is squarely aimed at affordable housing developer John Elberling.

Elbering’s Yerba Buena Neighborhood Consortium has contributed hundreds of thousands of dollars to progressive ballot measures and candidates – Farrell is often on the opposite side.

Farrell says Elberling is illegally spending public funds his group received for affordable housing for political purposes. Elberling counters that the money comes from the millions of dollars it made after renovating and refinancing federally subsidized apartments.

Because the group is a limited liability corporation, it doesn’t have to say where its money comes from. Farrell’s yet-to-be introduced legislation would, among other things, require LLCs to disclose the source of their campaign donations.

“It is the definition of dark money and I don’t believe we should stand idly by,” Farrell said.

Elberling agreed. “Disclosure is good. We’re all for it,” he said.