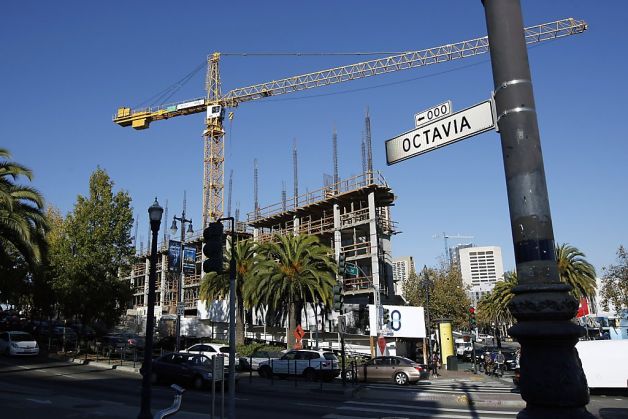 Whole Foods Market‘s newest San Francisco store opens Wednesday, with a customer base at the ready.

The 30,000-square-foot store, at Market and Dolores streets, sits on the ground floor of a new eight-story, 81-unit apartment building, with an herb garden, butterfly habitat and on-site car sharing – “the place for your urban lifestyle,” according to its calling card. Tenants started moving in Friday.

Two blocks west, at Market and Sanchez streets, is a new, five-story, 22-unit condo complex called the Century. One block farther west, at the intersection of Market, Noe and 16th streets, sits Icon, consisting of 18 new “luxury residences” – all sold within two months – atop a Bank of the West branch.

To the east, within easy walking, biking or car-sharing distance of Whole Foods, are three more residential and retail complexes close to completion, with sales offices already open. “We’re already about 30 percent sold, and ahead of expectations,” said Hugh O’Donnell, sales manager with Polaris Pacific, which is marketing Linea, a nine-story, 115-unit glass-wrapped condo complex at Market and Buchanan streets, built by Brian Spiers Development.

While some of the biggest recent changes in San Francisco have occurred South of Market and Mid-Market, the commercial strip stretching from Octavia Boulevard to Castro Street, known as Upper Market, is also undergoing a transformation. An outgrowth of the six-year Market & Octavia Area Plan, the housing and retail developments – with more to come – have dramatically altered Upper Market’s skyline as well as the neighborhood below.

“The changes have been in the pipeline for some time, but now you see them, the difference is palpable,” said Dan Safier, founder and president of Prado Group, which developed the Market and Dolores project in what used to be the S&C Ford showroom and is now called 38 Dolores.

“It’s exciting to see underutilized gas stations and car dealers and holes in the ground turn into vibrant new places for people to live and shop,” Safier said.

Condos at Linea, formerly a Union 76 gas station, are selling in “the low 600s” (thousand) for one-bedrooms to the “mid-800s” for two-bedrooms, said O’Donnell. Prices at Icon, the site of a burned-down church and then a community garden, also closed in on $800,000 before they were all snapped up.

“The market is so different in San Francisco,” said Suzanne Gregg of San Francisco Realtors Gregg-Gorski, which handled the Icon sales. “There are so many young people with very good jobs.”

Is she referring to techies? “Yes, they were the target market, and that’s what we saw coming through.” Plus, she said, older folks from Noe Valley and Corona Heights downsizing from larger homes who want to stay in the city.

They and many others moving into Upper Market (UpMa?) may be downsizing quite a bit. Units measure as small as 450 square feet – “teeny-weeny floor plans,” as one real estate blog described them.

“There are a lot of changes, and a lot of them are positive,” said Supervisor Scott Wiener, who represents the Upper Market area and has owned a small condo in the Castro district since 2004 (“I would not be able to afford it today.”). In addition to more housing, “we’re adding a lot more retail, streetscape, lighting and safety improvements.”

“Although it’s not competing with the older housing stock, the new housing is very expensive and out of reach for many people. It again points to the urgent need for new affordable housing.” Wiener said.

Wiener wants to alleviate some of that shortage in his district by allowing mother-in-law units to be added to existing structures.

There are a handful of below-market rental units mixed in with some of the new developments. To meet the city’s affordable housing conditions tied to the Linea project, Brian Spiers Development recently completed work on the 24-unit below-market-rate condo complex at 1600 Market off Franklin Street. Vouchers for the units, priced between $201,000 and $224,000, have just started to be issued.

For the 38 Dolores project, Prado Group paid $5 million into the city’s affordable housing fund. “The city can leverage that money into other (below-market-rate) projects ready to go,” said Safier.

“We’re very engaged in helping the city to build a broad range of housing. But there are a number of levers that need to be pulled. The process needs to be streamlined, to get more supply faster.”