In Napa, the market typically begins to warm up in early spring, with both listing and sales volume steadily building through early-mid summer. With April’s end, we now have 2 months of spring season data unaffected by market activity at the end of 2018, when financial markets plunged. As of early May 2019, stock markets have recovered to hit new highs (though some subsequent volatility has developed) and interest rates are far lower than last year’s peak.

Because the county doesn’t have that many sales in any given month, its monthly median sales prices can sometimes jump around without great meaningfulness. Right now, we are not seeing any significant increase compared to the beginning of last spring, but the next few months will provide more data. In 2018, the Napa County median house price ended up peaking, on a monthly basis, in August, and on a quarterly basis in the 3rd quarter (July through September).

Around the Bay Area, the general trend has been year-over-year stability in median sales prices or small percentage declines. The large y-o-y jumps in appreciation that have been common in recent years have so far not occurred in 2019. 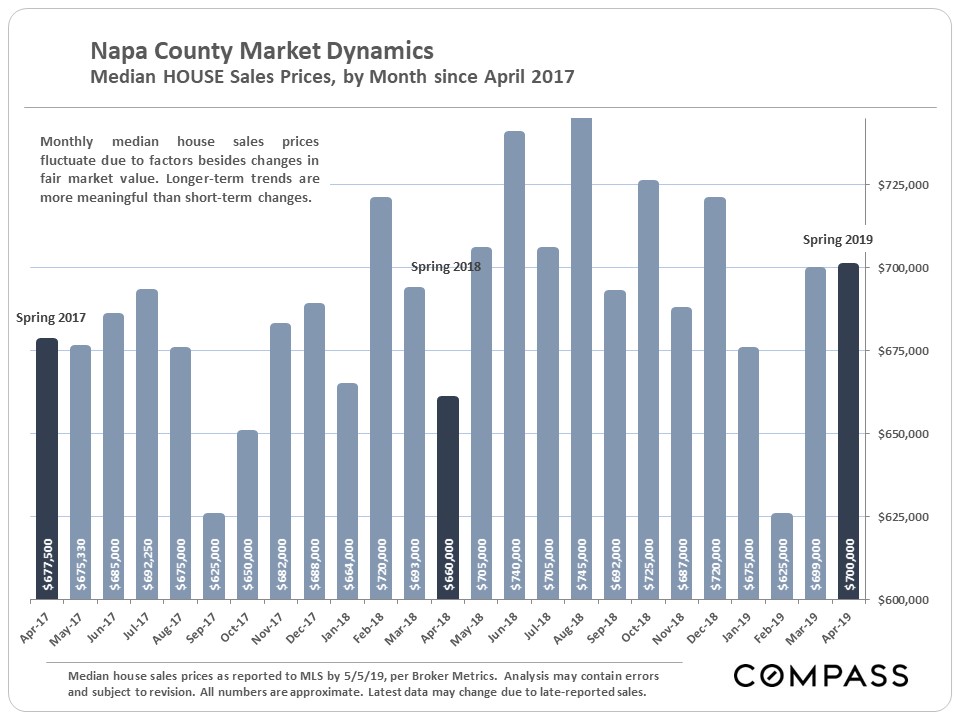 This table compares the March-April market statistics of 2018 and 2019. Generally speaking, the Napa County market has cooled somewhat year over year, with the number of active listings, of average days on market, and of price reductions increasing, and the number of sales declining. But the median house sales price – based on a relatively low number of sales during the 2-month period – ticked up a little. 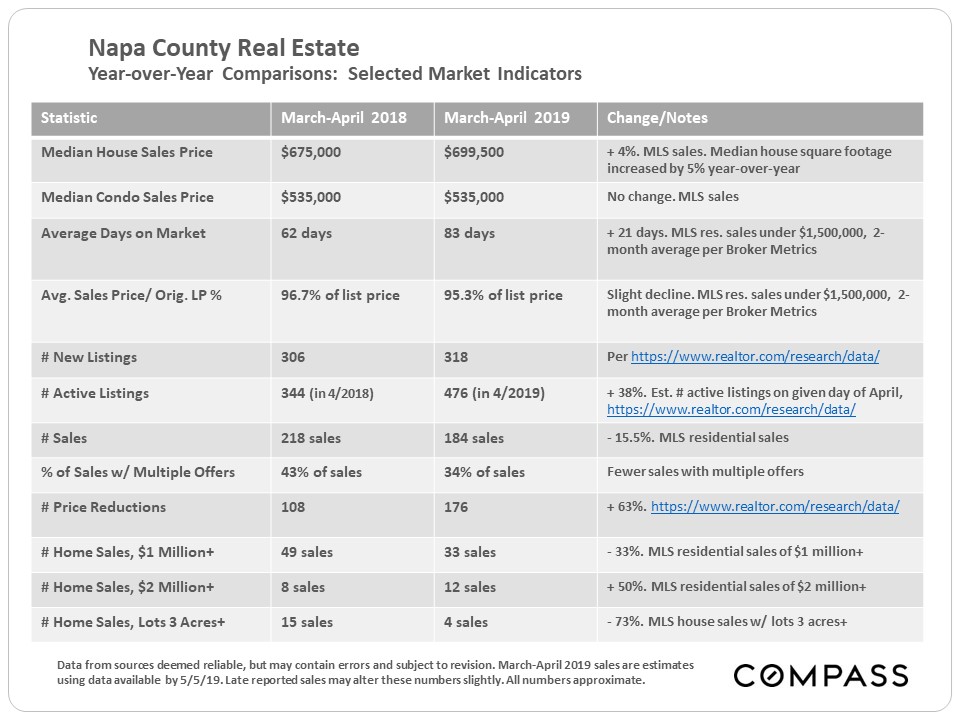 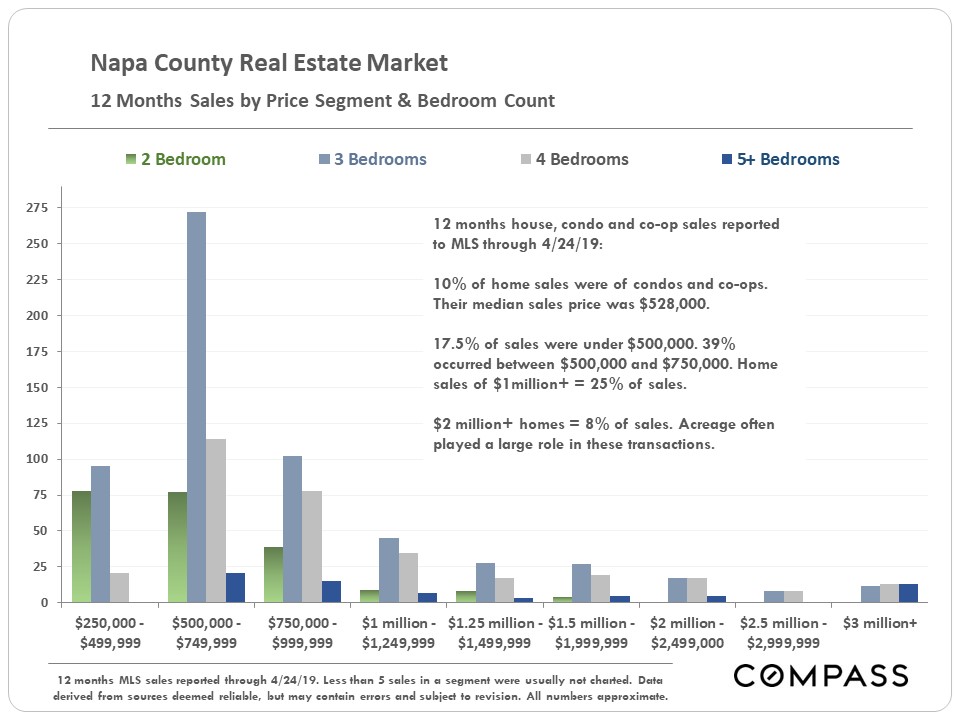 The next chart breaks out the number of house sales over the past 12 months by city, with median house sales prices and median square footage. (Median means half the sales were for more, or larger size, and half for less, or smaller size.) This analysis focuses on the sale of homes with lots of 2 acres or less – to help keep the median sales price comparisons relatively apples to apples.
St. Helena had the highest median home price in the 2 counties – as it commonly does – and the largest median home size. 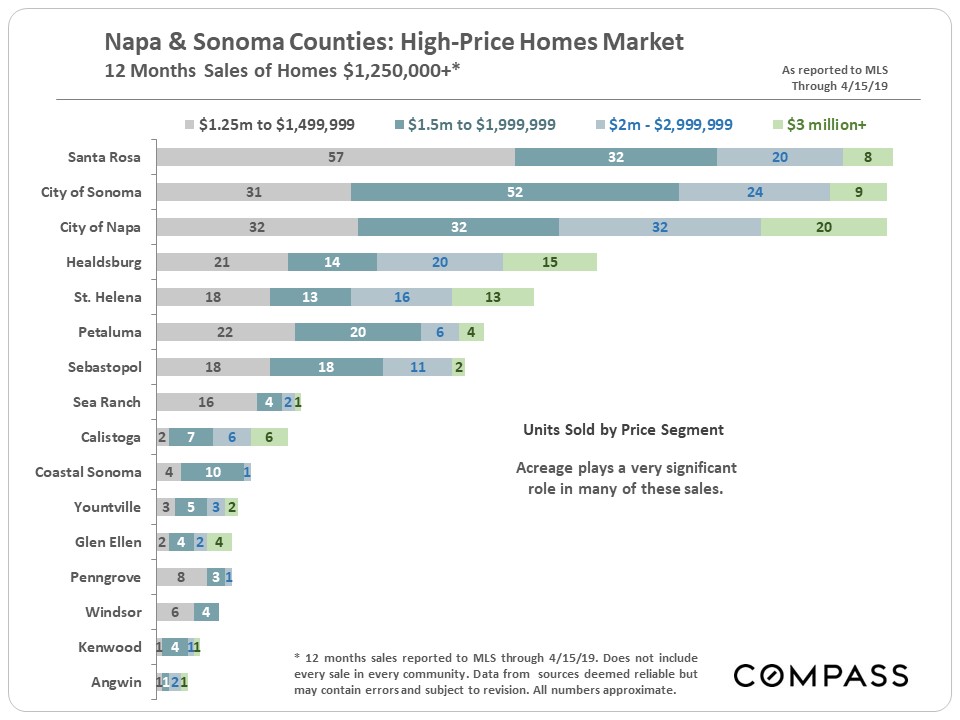 The more expensive the home, the smaller the pool of potential buyers, and generally, these properties take much longer to sell. Napa County has a substantial market of very expensive homes – including estates with significant acreage – but in the highest price segment, $5 million+, the supply of listings in Q1 far exceeded demand. Considering the competition for qualified buyers, correct pricing is critical to effecting a sale.

As a proportion of total active home listings, Napa has far more $5m+ listings than any county in the Bay Area: approximately 8.3% of listings in Napa vs. 2.4% in Sonoma, 5.7% in Marin, and 4.5% in San Francisco. 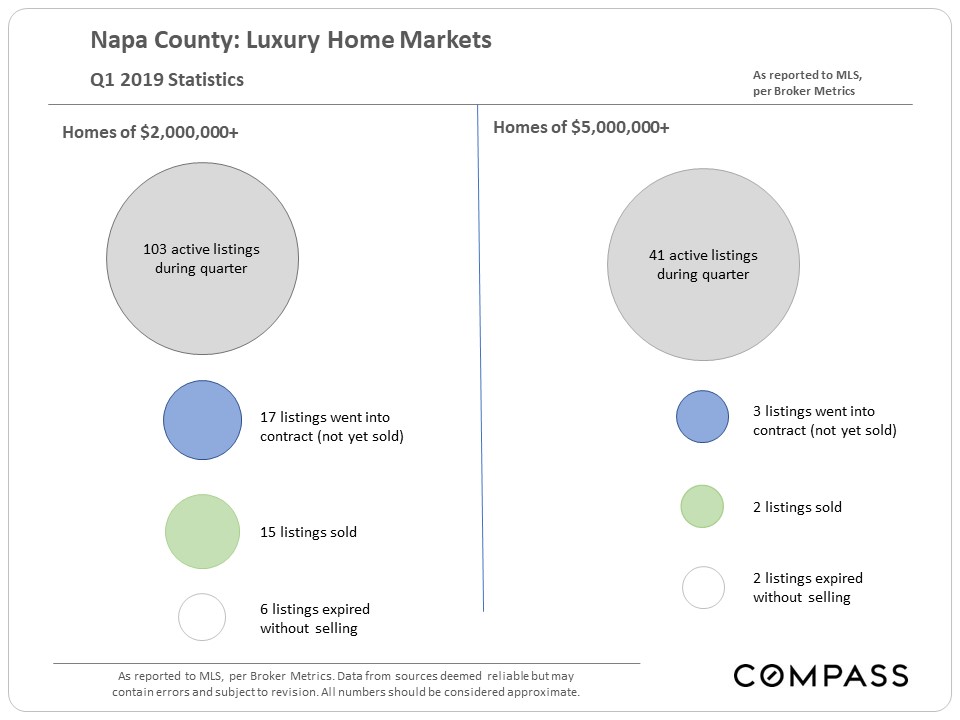 Many factors influence home construction size during any particular period: Affluence, economic conditions, household size, land costs, population growth, highway construction, natural disasters, etc. Generally speaking, the median sizes of houses built in the Victorian and Edwardian eras – before 1920 – were larger, and then declined into the mid-century period. Home sizes began to climb again with the large population and housing-construction increases in Napa and Sonoma Counties that occurred in the decades following. Recently built houses are larger than ever.
It is common that older homes destroyed by natural disasters – such as during the recent fires in Sonoma and Napa, or in the 1991 Oakland hills fire – are replaced by larger homes.

Throughout the Bay Area, buyers looking for smaller homes often purchase condos or co-ops, but these only constitute about 10% of the market in Napa County.

After years of large population increases around the Bay Area, in the last 2 years through July 1, 2018, growth slowed considerably in most counties, declined slightly in Marin, and dropped more significantly in Sonoma and Napa Counties. In the last year measured by the census, the destruction of thousands of homes by fire in the wine country certainly played a role in this decline, and is presumably a short-term effect as rebuilding proceeds. 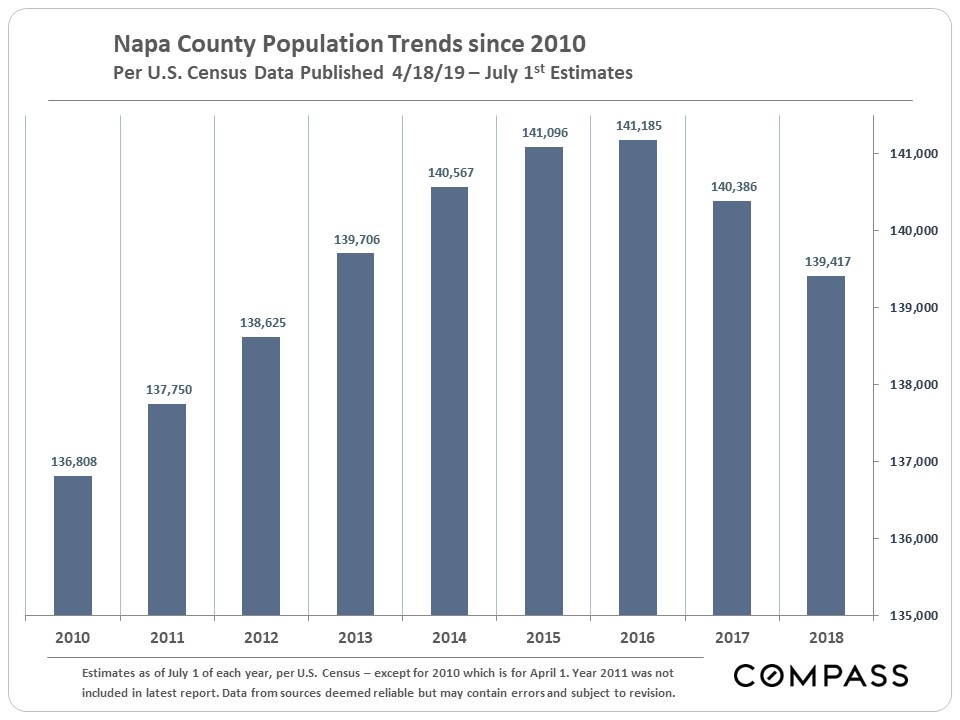 The enormous jumps in population occurred further south in counties most affected by the high-tech boom and its accompanying social, economic, quality of life and housing-market effects. 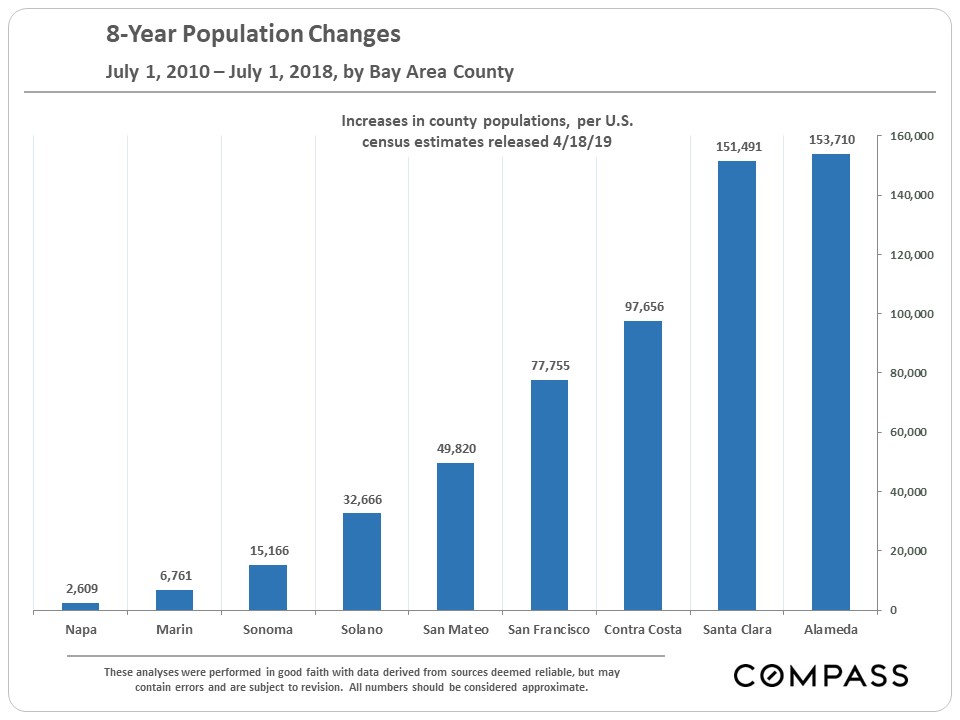 Napa County has the lowest average 1-way commute time in the Bay Area, one advantage of living further away from the traffic-clogged hubbub further south. (However, not much use of public transport in Napa.)

In recent years, the Bay Area has been the biggest destination of venture capital investment dollars in the country. These tens of billions of dollars have constituted a massive factor in supercharging the creation of new companies, hiring, and, eventually, IPOs. Though the biggest effects are concentrated in SF and Silicon Valley, the creation of new wealth certainly affects Napa County as well, especially its second-home market.