A San Francisco design firm has literally drawn a map showing how the city and Silicon Valley are growing closer together through a network of private corporate buses.

Earlier this year, Stamen Design took a commission from San Jose-based arts nonprofit Zero1 to create a piece for the group’s 2012 biennial exhibit on the theme “Seeking Silicon Valley.”

Stamen founder Eric Rodenbeck wanted to tackle a phenomenon he witnessed right outside his Mission District office: rising numbers of private buses taking tech workers who live in San Francisco down to offices in Silicon Valley. Mr. Rodenbeck and his team decided to map out the bus lines and the flow of people they carried.

In researching the routes, they discovered the buses were shuttling the equivalent of one-third the daily traffic carried by the public Caltrain commuter railroad—and ignited a conversation about mass public versus elite private transportation in the Bay Area.

Stamen’s challenge was that there was little existing information about the buses, and many of the tech companies are secretive about their routes and timetables. The city of San Francisco itself had limited data about the phenomenon, Mr. Rodenbeck says.

Since the buses were “hiding in plain sight,” he says, Stamen employees took turns taking notes at a known Google Inc. GOOG +1.94% bus stop on 18th Street. Stamen also used its $20,000 commission fee from Zero1 to hire about 10 bike messengers and other people to count buses and passengers and even follow the buses along their routes.

Google declined to comment on the map, but said it has over 100 buses that shuttle 4,500-plus people per day from more than 30 stops across seven Bay Area counties.

Facebook said the map of its routes was “somewhat accurate,” but some of the stops appeared to be mismarked. The company declined to comment further. Stamen says some of the stops were aggregated to help show patterns.

EA said the map accurately reflects its buses that go from San Francisco to the peninsula.

Stamen has now posted the work online, and it appears in an exhibit at Zero1’s downtown San Jose gallery.

“The interpretation of the work depends on where the viewer lives,” says Zero1 curator Jaime Austin. “People in San Francisco ask questions like, ‘Does this lead to gentrification?’ People who live in San Jose say, ‘Wow, why don’t they want to live here?’ ”

Stamen’s Mr. Rodenbeck says he expected the map to be a lightning rod for conversation about gentrification in the Mission, but was surprised to see how much traffic the buses were shuttling from other parts of the city, especially the Marina. “That’s a conversation about citywide change,” he says. “Is the city a place where valuable work can happen, or is it just a bedroom for Silicon Valley?”

The map underscores a wider economic reality: San Francisco is getting very tightly tied to the Valley. “I’m not kidding myself that this map is going to have San Francisco annex Palo Alto, but stranger things have happened,” says Mr. Rodenbeck.

Stamen and Zero1 plan to host a public discussion about the map with the San Francisco Planning and Urban Research Association at a date still to be determined.

The Zero1 Biennial, which features work by 24 artists and includes an exhibit on how Stamen made its map, is showing at 439 S. First St. in downtown San Jose through Dec. 8. 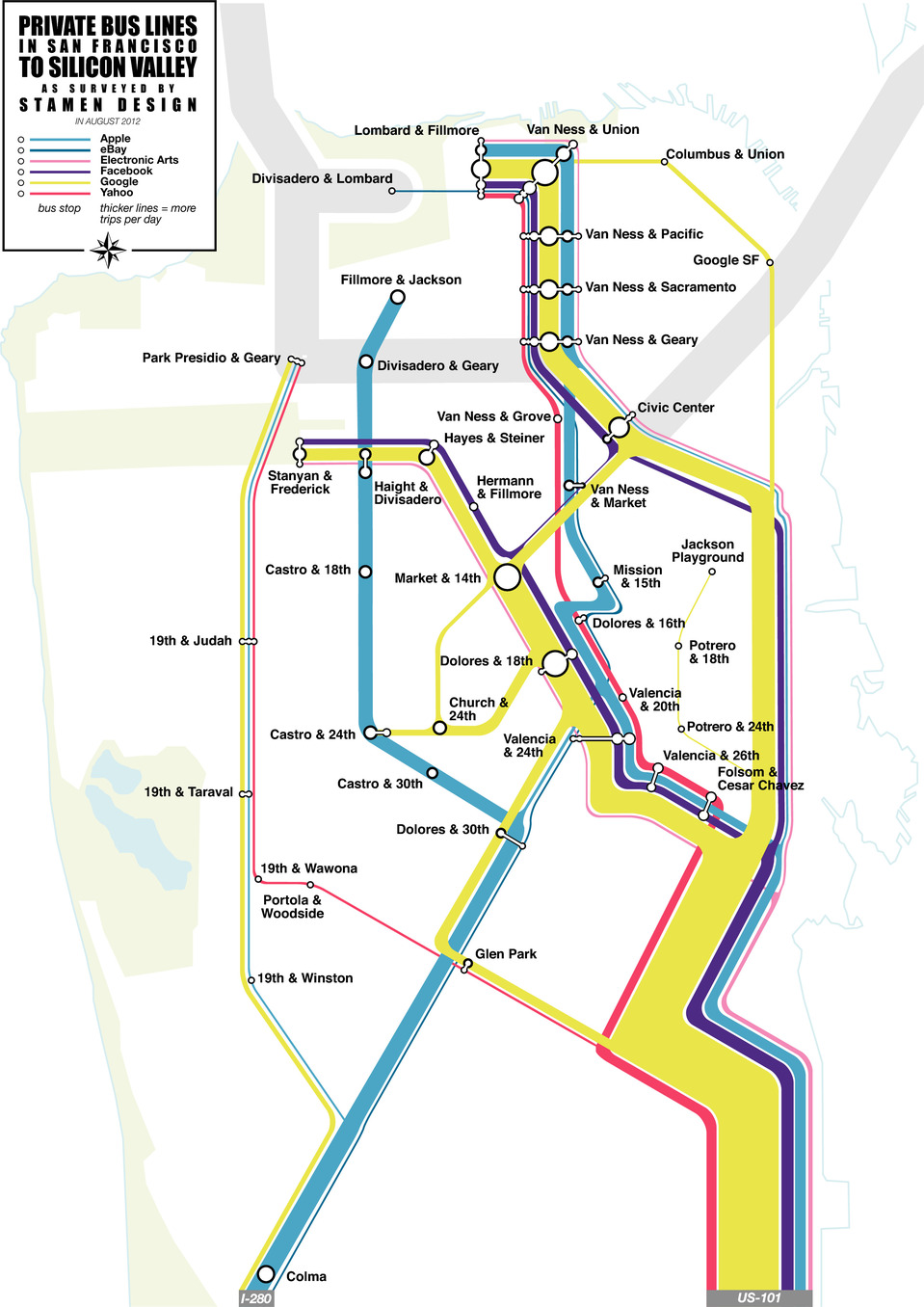