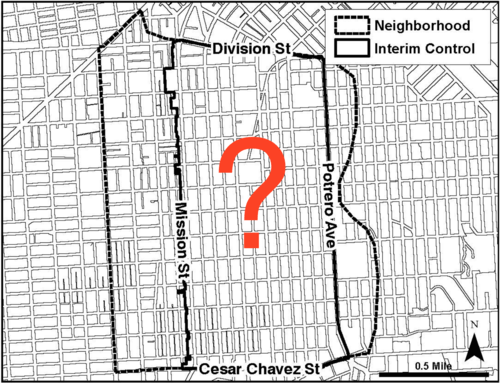 If the interim controls are passed, projects inside the solid line will be subject to greater scrutiny.

As the tension over displacement of Latino residents continues to rise, community meetings and Planning hearings for new residential developments have become the battleground on which Mission District turf wars are waged. Residents and activists pack meeting rooms to form human microphones, serenade Planning commissioners with heavy metal lyrics, and heckle PowerPoint slides. Projects that fulfill, or even try tocreatively exceed, existing affordable housing requirements still meet with massive community resistance from groups that want to see nothing but affordable housing built in the Mission. That breakdown in the process has led the Planning Department to draft interim controls for a large swath of the neighborhood, as a way of temporarily adding more official scrutiny to projects that are already getting extra scrutiny from residents. Today the Planning Commission is weighing those interim controls, and if they move forward, a final proposal could be adopted as early as July 23.

At the hearing, which is now well into the public comment period, we’re hearing speakers compare interim controls to a moratorium, which isn’t exactly right. Whereas a moratorium would halt all types of market-rate housing projects above a certain size in part of the Mission, interim controls would not halt any projects per se, but they would introduce a greater level of scrutiny and, potentially, ask for much higher levels of affordable housing. “It would benefit everyone if we acknowledge that this added scrutiny is happening and is going to happen,” says Planning Department senior policy adviser AnMarie Rodgers. “It’s easier if we write up expectations, and inform the public and project sponsors of what to expect out of the Planning Commission.”

The interim controls would be in place for six months, according to the proposal now before the Planning Commission. If adopted, they would take effect immediately, and would require an additional conditional use authorization (on top of any other entitlements required by the regular planning process) for projects that

The controls would apply to all projects whose sponsors filed an initial application for a building permit or environmental application after January 1, 2015. That means controversial projects like 1979 Mission and2000 Bryant would be exempt, as the San Francisco Business Times points out. 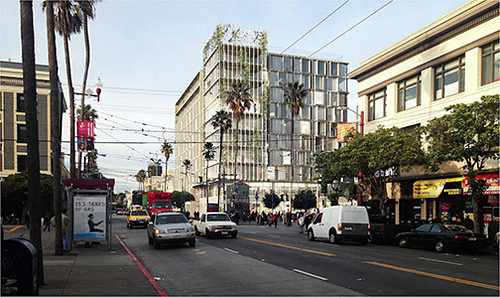 Rendering via Skidmore, Owings & Merrill, the architect for the controversial 1979 Mission development

You can take a look at the requirements in detail in this PDF (see Exhibit C), but for now let’s zoom in on how the proposed controls would affect projects of five or more units.

These larger projects would be held to a higher standard of affordability than what the current rules require. Forty percent of the new units would need to be affordable for low-income and very-low-income households, and no more than 45 percent of the residences could be so pricey that only above-moderate-income households could live there. Alternatively, such projects could choose to make 100 percent of their units affordable for moderate- or below-moderate-income residents. Market-rate projects would also still be considered, provided they carry out a displacement study.

Let us repeat: market-rate projects would also still be considered. That means that in theory a developer could still put forth a proposal for a market-rate project, but there is an added burden of completing a displacement study, to help the Planning Commission understand the effect the project would have on the neighborhood.

Asking for a displacement study is a relatively unique measure, Rodgers explains via email, but she says it’s in step with what residents have been asking for. “[T]he community has been demanding similar information [and] asking to delay approvals until more is known,” Rodgers writes. “Therefore, we think it’s better to be explicit about expectations so there are less surprises on the hearing day for projects.”

In other words, it’s all about trying to make hearings more productive by narrowing what has become a widening chasm between the letter of the law and the mounting concerns of the community. “We’re laying out additional expectations regarding affordability and the loss of vital community services and expecting that to be part of hearing,” says Rodgers.

The goal of the six-month timeline is to build into Planning’s proceedings a greater emphasis on mitigating displacement while community stakeholders work with the city on a rescue package of sorts. CalledMission Action Plan 2020, or MAP 2020, the effort is a collaboration between members of Mission community, the Mayor’s Office of Housing, SF Planning, the Office of Economic and Workforce Development, and others. The plan, which is set to be released this fall, might include strategies for eviction defense, rehousing displaced households elsewhere in the Mission, and site acquisition for affordable housing, explains SF Planning’s Claudia Flores. “The overarching goal of the plan is, How can we retain low- and moderate-income families most affected by the housing crisis and the pressures of the market?” Flores says.