Spring has Sprung Alongside Housing Prices

March often signals the start of spring and has historically brought an influx of property listings onto the market as seasonal home buying gets underway. In San Francisco, despite more properties being listed for sale in March than in either January or February of 2013, inventory levels are still below year-over-year figures.

The lack of inventory has fueled a drastic jump in median home sale prices for both single family homes and condominiums at the city and state levels.

According to the California Association of REALTORS®, strong sales in higher-cost coastal regions, coupled with heated market conditions have helped drive California’s median home price to its highest level in March since May 2008.
In San Francisco, that demand has resulted in 51 percent of single-family homes sold for more than 5 percent over list price and 35 percent of condos sold for more than 5 percent above list price. Click on the graph below to see the number of properties sold above and below asking price in the first quarter of 2013. 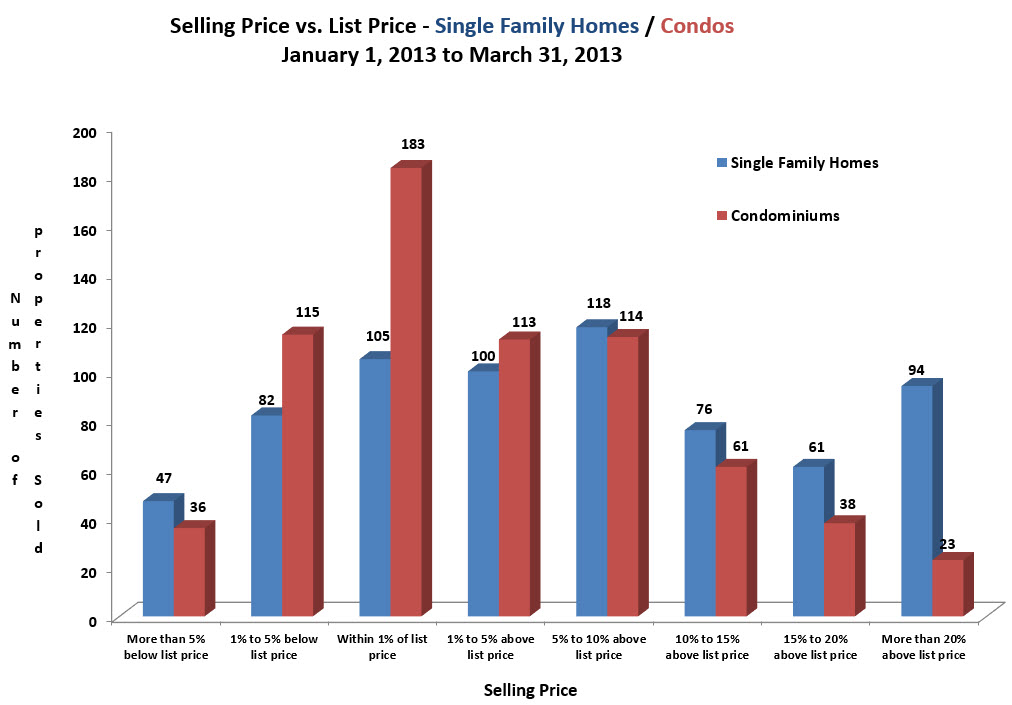 District 6 in San Francisco exhibited the largest gain in median home prices of all the districts, jumping 102 percent in March 2013 compared to March 2012 figures. The jump was a result of very few home sales during the month. The median home price in the District (which includes the neighborhoods of Hayes Valley, Western Addition, NOPA and Lower Pacific Heights) rose to $2.2 million in March.

Just like single-family homes, the inventory of condominiums for sale across San Francisco’s 10 Districts fell by 27.6 percent, to 682 condominiums. The number of condominiums under contract, meanwhile, grew by 3 percent to a total of 313.

District 8 in San Francisco showed the largest jump in median sales price for condos, bounding 65 percent over March 2012 numbers. The median price for the area (which includes Telegraph Hill, Nob Hill and Russian Hill) was $1.07 million.

Consumer Confidence Falls in March
Lynn Franco, Director of Economic Indicators at The Conference Board recently said in a statement, “Consumer Confidence fell sharply in March, following February’s uptick. This month’s retreat was driven primarily by a sharp decline in expectations, although consumers were also more pessimistic in their assessment of current conditions. The loss of confidence, particularly expectations, mirrors the losses experienced this past December and January. The recent sequester has created uncertainty regarding the economic outlook and as a result, consumers are less confident.”

The California Association of REALTORS® highlighted the record jump in statewide median home sales prices in a recent press release saying, “The statewide median price of an existing, single-family detached home climbed 13.7 percent from February’s $333,380 median price to $378,960 in March, reversing a two-month decline.  The month-to-month increase was the highest since C.A.R. began tracking this statistic in 1979. The March price was up 28.2 percent from a revised $295,630 recorded in March 2012, marking the 13th consecutive month of annual price increases and the ninth consecutive month of double-digit annual gains.”

Better to rent or buy?

CNNMoney recently categorized San Francisco as a one of the 10 major cities that it is better to rent in than to buy in. The report said with home prices still among the highest in the nation, it can take at least five years before buyers begin reaping the financial benefits of homeownership.
Source: San Francisco Association of Realtors. “Market Focus”. April 2013.