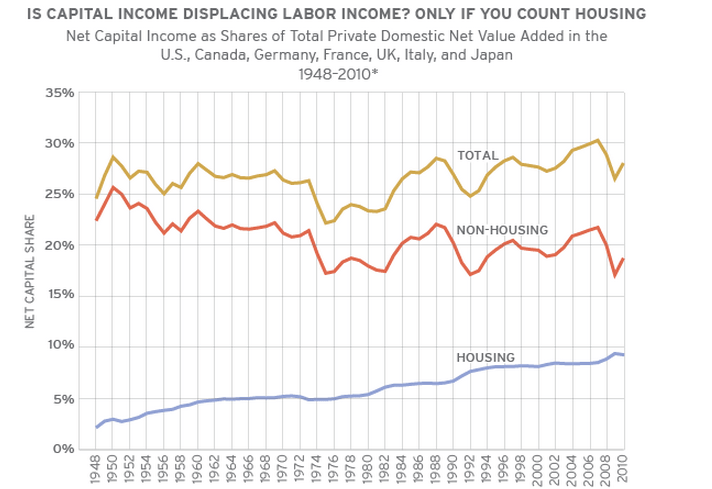 Wealthy tech founders and the automation of middle-class jobs are often blamed for increasing concentrations of wealth in fewer hands. But, a 26-year-old MIT graduate student, Matthew Rognlie, is making waves for an alternative theory of inequality: the problem is housing.

Rognlie is attacking the idea that rich capitalists have an unfair ability to turn their current wealth into a lazy dynasty of self-reinforcing investments. This theory, made famous by French economist Thomas Piketty, argues that wealth is concentrating in the 1% because more money can be made by investing in machines and land (capital) than paying people to perform work (wages). Because capital is worth more than wages, those with an advantage to invest now in capital become the source of long-term dynasties of wealth and inequality.

Rognlie’s blockbuster rebuttal to Piketty is that “recent trends in both capital wealth and income are driven almost entirely by housing.” Software, robots, and other modern investments all depreciate in price as fast as the iPod. Technology doesn’t hold value like it used to, so it’s misleading to believe that investments in capital now will give rich folks a long-term advantage.

Land/housing is really one of the only investments that give wealthy people a long-term leg up. According to the Economist, this changes how we should rethink policy related to income inequality.

Rather than taxing businesses and wealthy investors, “policy-makers should deal with the planning regulations and NIMBYism that inhibit housebuilding and which allow homeowners to capture super-normal returns on their investments.” In other words, the government should focus more on housing policy and less on taxing the wealthy, if it wants to properly deal with the inequality problem.

This is precisely the problem in my home city, San Francisco. The tech-fueled economy has been great for most San Franciscans, where a booming tech sector has increased wages and protected the local economy from the ravages of the recession

But, housing prices have skyrocketed. Just 14% of homes are affordable to middle-class families. In the once diverse Mission District, where many young tech workers are now relocating, it’s hard to find a new home for less than $1.5M.

Local housing boards have made it damn-near impossible to build new condos. After much infighting, San Francisco plans on building up to 50,000 more units. But, San Francisco’s chief economist, Ted Egan, estimates that that the city would need at least 100,000 new units to stem increasing costs, let alone bring prices down to something more affordable.

If Rognlie is correct and we really care about inequality, it might be wiser to redirect anger towards those who get in the way of new housing, rather than rely on taxes to solve our problems.